Welcome to INTERVIEWED, a series of conversations with creators of all kinds from all over the internet and 3D world.

Today we’re joined by one of the UK’s top men’s fashion and lifestyle bloggers, Sam Squire of www.imsamsquire.com 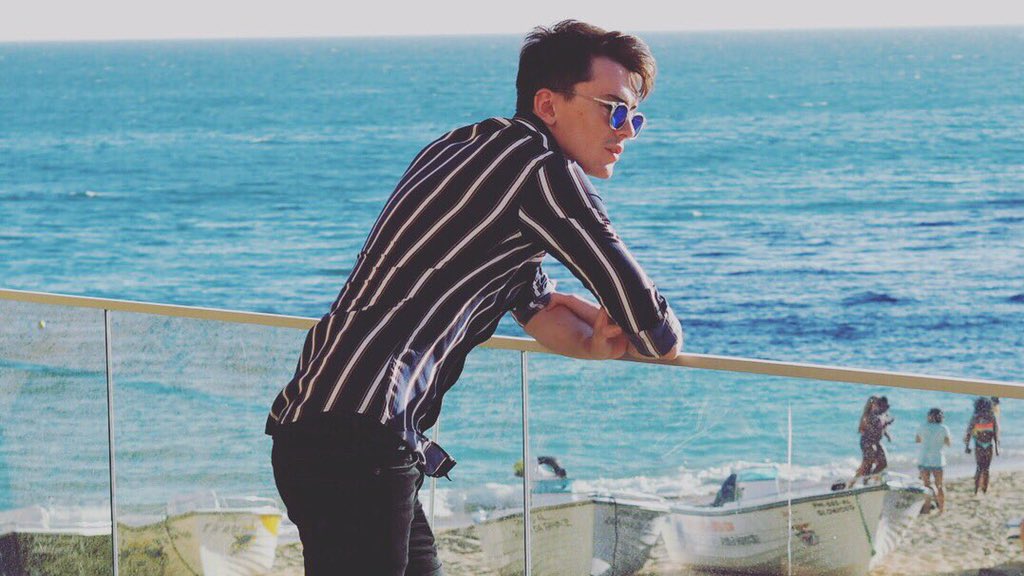 D: What do you do as a creator?

S: I’m a blogger, I blog about men’s fashion and lifestyle over on I’m Sam Squire, with a few extra bits added in here and there including things like motoring reviews and even discussing mental health – it’s a place full of something for every type of guy!

D: You’ve got something for everyone! What about the man behind the blog?

S: I’m 22 years old, often mistaken for being 12, I’ve been blogging since I was 18. I’m from Lincoln which is a pretty little city in the East Midlands, in my free time I’m a blogger, however work-wise I’m the Marketing Manager of a national brand.

D: When did you begin blogging, and why did you start?

S: I started blogging September 2013 – my sister Katie has her own blog,which she’s been running for years, she really was he person that got me into blogging. I had been reading some male bloggers, of which there weren’t many at all at that time – I thought I’d give it a go and haven’t looked back!

S: It’s shot by to be honest mate!

D: Is there a favourite part of blogging for you?

S: I think my favourite part of blogging is the community. It’s crazy how you go from reading someone’s blog and following them on Twitter to having them as mates. There are so so many bloggers now and I think there will always be room for more, on the most part the community is really supportive and there are loads of great bloggers from ones writing about mainstream topics, to those that blog about niche topics – whatever you like you can blog about it, and if you’re a creative person that’s really important because it gives you an outlet for your creativity.

D: On the other hand, any parts you dislike?

S: Haha are you sure you want my answer!?!

Simply put. Fakers. Bot users – it absolutely destroys my soul to see some amazing content creators ignored in favour of people that have bought their following – it annoys me beyond words. I see people working for years to build a strong organic audience with great conversion rates, but because they don’t have 50k followers they don’t have a chance with big brands. There’s such a ‘them and us’ attitude in blogging, it’s so important to keep it real and keep it honest. Whilst I’m on my soap box, I also really don’t like the word ‘influencer’ – it bugs me because I feel like the people that use it are purposely trying to influence their audience, which really isn’t what this industry is about. I think blogging is for people who love to create content – if you’re chasing a pay check, or trying to get on TOWIE then you’re doing this for completely the wrong reasons

Man likes a rant, I could’ve gone on but I’ll avoid it

S: Hahaha I could go in for hours of bot users but not tonight

D: Looking back at all the stuff you’ve made and done, any stand out posts/moments?

S: That’s actually such a good question, I feel like I’ve been on the blogging circuit for so long, but really I don’t think I have one moment in particular that stands out. It blows my mind on a daily basis that people actually want to read my ramblings and follow me online, I feel so humbled by the comments I get, I get emails and DMs saying I’m doing great and people enjoy what I do, that for me stands out – seeing that people appreciate and people read – it blows my mind. I’ve worked with some amazing brands and every email I get I’m grateful for, the fact brands recognise me as someone they want to wear and review their product really blows my mind. I think I’m just on a continuous path of development and the whole thing is epic. Like I say, not one particular stand-out moment, because the whole journey has been awesome!

D: Very healthy and good outlook you have on it all.

What influences you and your creations/creative process? People, bloggers, TV, anything at all.

S: Oooooft that’s such a good one

I’d say I am influenced by creativity in general – so many other content creators influence me, whether it’s good or bad. Sometimes I’ll look at something someone’s done and purposely try and swerve it – other times I’ll be gutted I didn’t come up with the idea first! Creative people inspire me, I wouldn’t say anything from TV really influences me, I like to try and do my own thing and create my own path, you quickly learn if an idea is a bad one when people are like ‘what is his guy doing’ – but it’s worth being a bit risky!

There’s some bloggers that have inspired me from the outset, John (The Everyday Man) is one I have followed from day dot, I love the content that guy creates! Adam (The Male Stylist) has such great style I’ve always been envious of how he absolutely nails that dapper look time and time again. Newer bloggers on the scene such as Robbie (The Middle Aged Man) are nailing their content, I’m a blogger that also likes to follow a select few blogs, and these three guys do it so well!

S: Ah there’s always loads of plans in the land of Squire – next year is 5 years and I have some really exciting plans currently in motion for that to definitely celebrate 5 years in style! I have some really great future plans for the blog, I want to keep on developing and producing content that everyone wants to read. Myself, Charlie (Modish Male) and Robbie (The Middle Aged Man) have a really awesome collab coming up, it’s great to be able to work with other content creators on producing some really cool engaging content! I just want to keep up the momentum of the blog and keep everyone engaged.

D: I’m really excited to see the collaboration you guys do, best see some messy shots of you guys in Ibiza!

S: Haha cheers man! Oh god I guarantee I’ll post some messy shots if the boys don’t kill me for it haha! Should be epic though!

D: Charlie defo will do.

S: Hahaha I’ll get him on the tequila and get him langers – I’d try with Robbie but he’s Scottish and will def drink me under a table.

D: Hahaha yeah Robbie will take you down, I should be messaging him about the messy pics really.

S: Hahaha don’t encourage him he thinks I’m a victim because I’m young, I can def drink but no way am I challenging him!

S: Oh no, if you ask Charlie (Modish Male) and Ste (StyleFade) you’ll know this is a talking point. I’ve only ever watched a little bit of Harry Potter and I literally can’t stand it. The lads made me take a test to see which house I was, I was Slytherin…I remember being called filth for that!

S: Haha I know, we were both attacked for our lack of love for Potter

D: Do you have a favourite film of all time? Guessing not HP!

S: I honestly don’t think I could pick one film, I’m a big fan of movies and I’m really in to all different genres – I think it’d be impossible for me to pick just one film!
I’m big on comedy for sure, you’ve got to have a laugh in life. I do also like a good action film because I secretly want to be James Bond (don’t we all?!)

Finally, possibly the toughest one, who is your favourite band/artists/whatever? feel free to say more than one!

S: Again, this is really tough because I love music in general – I partnered with Apple Music recently for a new feature on my blog and they’ve opened my eyes (or ears) to a whole new world of music. Bastille will always go down as one of my favourite live acts, the same with Imagine Dragons – they both absolutely smash it with live performances and I was so stoked to have been able to see them live at Radio 1’s Big Weekend. Right now I am really into Dua Lipa, she’s doing great things, an up-and-coming artist called Sigrid is again making great moves in the industry and has a really unique sound. I’ve also been listening to a lot of old-school Kanye lately, I have a massively varied taste in music!!

A huge thank you to Sam for joining us this week! Make sure to follow him on Twitter and Instagram, and of course check out his blog.