Get ready for a bumper edition of New Music of the Month! There have been loads of amazing new tracks released the last couple of weeks and there’s no better place to catch them all than right here! 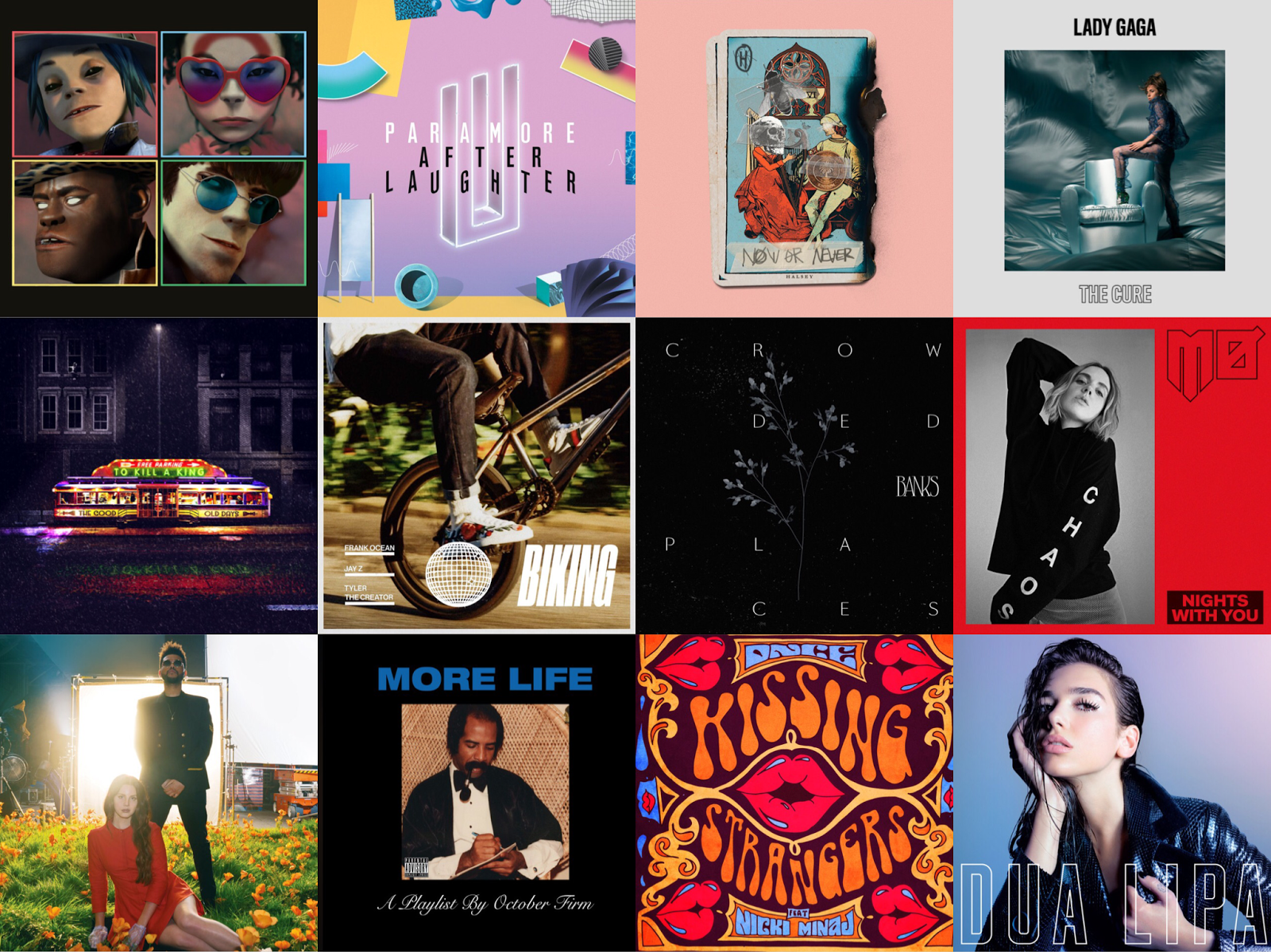 This stripped back track from Banks (say that four times fast) is the anti-thesis to songs like ‘Brain’ which we know her so well for. This song is built to chill too, but it feels like such a ‘real’ and tough track.

Bastille released a Spotify exclusive EP of some live performances of tracks from their latest album ‘Wild World’. Two Evils is a song made for live performances, this doesn’t disappoint and will hit you straight in the feelings.

This is my favourite song this month, I bloody love it and can’t stop listening to it. DNCE have captured classic pop that makes you feel like you’re in a 1950’s doo wop whilst simulatenously living and experiencing the now, and the 80’s due to some slick Jem and the Holograms references from Nicki. Awesome.

Drake always delivers. Passionfruit feels like such a Drake track in the way that it’s so good and 40 babies have probably been conceived with it on in the background.

So much music from Frank lately, man that 4 year dry spell is over and we are getting Frank ALL. THE. TIME. This is my least favourite of the tracks he’s released/been featured on lately, however as I’m referring to Mr. Ocean, this song is still amazing.

Man, Gaga dropping a song on Easter Sunday, well, Saturday at Coachella technically, but time zones. It’s like that time she dropped Judas on Good Friday all over again.

The Cure feels like a grand pop song compared to Gaga’s latest album, Joanne. This is a reminder that Gaga can conquer any genre of music!

God this song is so GOOD. I loved ‘Love’, but this blows it completely out of the water. No wonder it’s been chosen as the lead track on the album! However it does feel kinda awkward to be walking down the street singing ‘Take off, take off, take off all your clothes’. Maybe listen to this one in private.

Paramore are back with a tropical house vibe akin to Fickle Friends. Hard Times is a welcomed change, especially as Paramore’s line up has changed, with Jeremy leaving and Zac returning!

I can’t get enough of this song, the lyrics are meaningful, the backing track is new and refreshing for Paramore, but we have Hayley’s distinct vocals to remind us that this is always gonna be the Paramore we know and love.

This song is a grower, I wasn’t mad at first but I’m coming round to it.

I loved Badlands, hopefully LP 2 lives up to it, as of right now I don’t have that optimism, nothing can live up to Colors.

I’m really loving Dua Lipa lately. This track is yet another hit, every song she’s released so far has been incredible. I cannot wait for her debut album.

The addition of Miguel is really great, Dua + Miguel’s voices work brilliantly together, this is a pretty fresh collab.

Nights With You – MØ

Like Dua Lipa above, MØ is currently stringing together hit after hit after hit. We’re seeing a new era of young women ready to dominate the pop industry and this upbeat electro track is just another step forward for MØ.

The Good Old Days – To Kill a King

This feels more upbeat and a bit more mainstream than most TKAK tracks, however that isn’t to say it isn’t classically TKAK. This is already my favourite track of their’s, if you’re new to TKAK, start right here.

If anyone is heading to their London shows, let me know! I haven’t decided which I’m going to attend just yet.

Rather than try and describe a Gorillaz song, I’m just gonna direct you to listen to it.

As always, you can find these tracks in my Bangers of 2017 playlist.

A Month a Londoner