Hello again everyone, blogging twice in a week! It’s like old times. Or rather, the occasional times when I have my shit together. So, as you know I moved back to Liverpool this week after 3 months at home, I have moved into a new room, in a new flat with (mostly) new flatmates. One thing that is a must for me, is making my room feel like my room. I’m going to be spending a lot of the next 9 months living here, so even though there’s an end in sight, it is still my full time home for the time being!

So why not put that little bit of extra effort in! Here are a few bits of advice on how to make your room feel like a home:

Or alternatively, if you aren’t a fan of posters, you can use art prints (see my Robb Stark print below) or postcards (almost all of which I get from Paperchase for 60p each! They constantly bring new designs in too!)

If I weren’t renting, or if this was more of a long term situation, I would have these posters FRAMED TF UP! I’m not generally a fan of unframed posters, but I can more than make do here.

Posters not only add a bit of colour to your room (needed when you live in an entirely white room like I do), but also inject some personality. I love to know what people’s favourite films and TV shows are, as well as what art people choose to represent themselves! It is no secret that I am a big Indiana Jones fan. 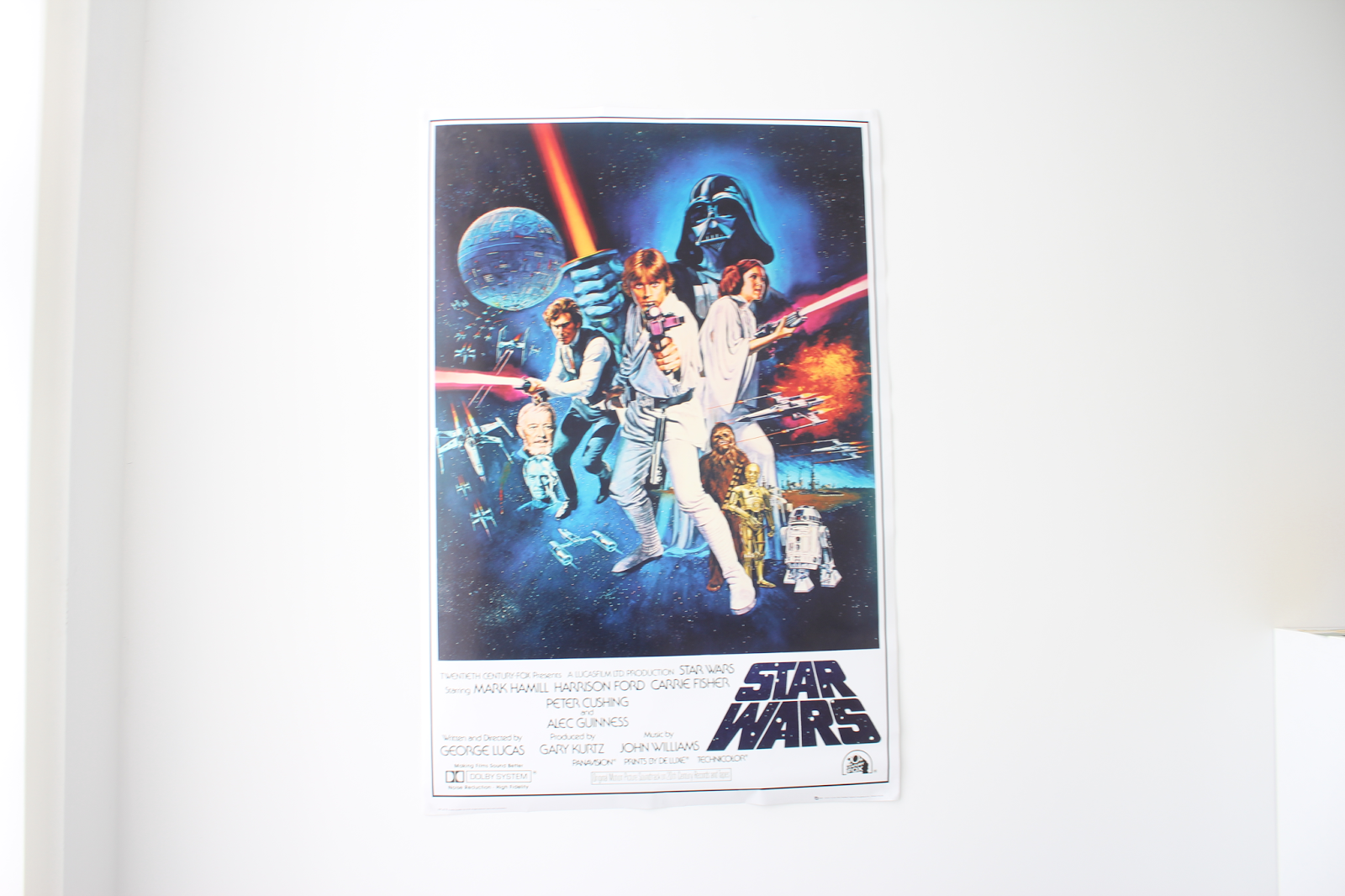 I only watched Star Wars for the first time this year, and I’ve been obsessed with it ever since. I love this poster because it features a huge amount of white, blending in with my room, but is also very blue/black in tone. I didn’t buy it because of the colouring, but now I’ve realised that the colours of this poster really tie my room together and fit in so well. How pretentious does that all sound? It’s a £3 poster David, get over yourself. Art prints are a bit more of an expensive option, I have this Robb Stark one unframed in my room. I intend to frame it at some point, but right now it’s fine as it is. This was from a shop in Liverpool called Nook and Cranny, which has sadly shut it’s doors, for £15. I have a pin board in my room, so I’ve covered in postcards, cards, invitations, trading cards, photographs, anything that is small enough to be pin-able! My new addition, and favourite addition, is ‘DAVEY’ spelt in small greetings cards. These were £1 each from Paperchase a few months ago, though I didn’t have to buy the D (lol) as I got it as a birthday card! These tend to sell out quickly, but I think they bring these alphabet cards out every now and then with new designs. Continuing on the ‘D theme’ (lol), I have this candle with the letter D on it! This was only £2 from ASDA, and adds a little something to my shelf. Most student accommodation will not allow you to have candles or to burn them, I don’t intend to ever burn this, I have it purely for decoration! I added a bit of green onto the bookcase at the end of my bed, as I think black, white and green look great together!

This ceramic pixelated deer was from IKEA last summer for about £10, and the cacti in the back (which are fake) were £10 from George Home at ASDA.

Plants will brighten and bring a bit of life to your room, even if they are fake! I didn’t realise that they were fake until after I had bought them, this also means that they can’t die on me, or attract bugs, win/win! Of course I had to bring some small Pokemon Tomy figures. It’s always good to have something that represents you, or at the very least makes you happy by having it in your room!

I own tons and tons of Pokemon merch, but I went for the ‘main 4’, as in the original 3 starter Pokemon and Pikachu! These also add a splash of colour to the room. I did want to put them in my bathroom, but I’m a lil scared of them falling into the toilet. There are two main focal points to any student room, these are always the desk and the bed. Student beds tend to be 3/4 double, or a double sized (mine is the former, thought I don’t notice the difference between this and a double), and since space can be a little bit of a luxury, the bed will take up a lot of room. So it’s a good idea to turn your bed into a bit of a decoration! I have a few sets of bed sheets, all are white, or largely feature white. At the minute I am using this set of sheets featuring overlapping skyscrapers! These are from Primark, and are a part of their new ‘luxury’ range! This was a bit of a shock for me when I reached the till and these cost more than expected, but to be honest, they cost the same as bedsheets you’d get anywhere! It’s some sort of stranger phenomena that when you go into Primark, if a shirt is above £6, it’s a rip off, yet in Topman double that is still considered a bargain!

As you can see above, I added a Union Jack cushion (from George Home at ASDA last year, but I have seen it in store recently), as otherwise it would have been very monochrome. Plus cushions are great. I had to force myself to return some cushions to ASDA the other week, as sometimes you may want that polar bear shaped pillow, but you (devastatingly) just don’t need it.

I hope some of this helped, or it could be too late, as I know today is the big day for everybody moving in! That’s definitely the case in my flat anyway!

If you’re going to university, I hope you have a great time, and I also have a few tips for you, which you can see here.

Or if you were just looking for some household tips, I hope I gave a few. If none of them were relevant, thanks for reading anyway, you’re the real MVP.

See you next time!