I have well and truly been bitten by the blogging bug over the past few days, I just can’t stop thinking of ideas and wanting to make posts.

This is a post that, if you read a lot of blogs, you’ve probably seen regurgitated and repackaged over and over and over. And if you follow a lot of those ‘life tips/hacks’ Twitter accounts, like I do (because Pinterest is just a bit too much effort), you’ll have had your fill of bag tips.

When thinking about this post, I thought about everything that I put in my bag when I’m going on a long train journey. In general, not all of these things are on my bag, but it usually is a combination of most of the items. 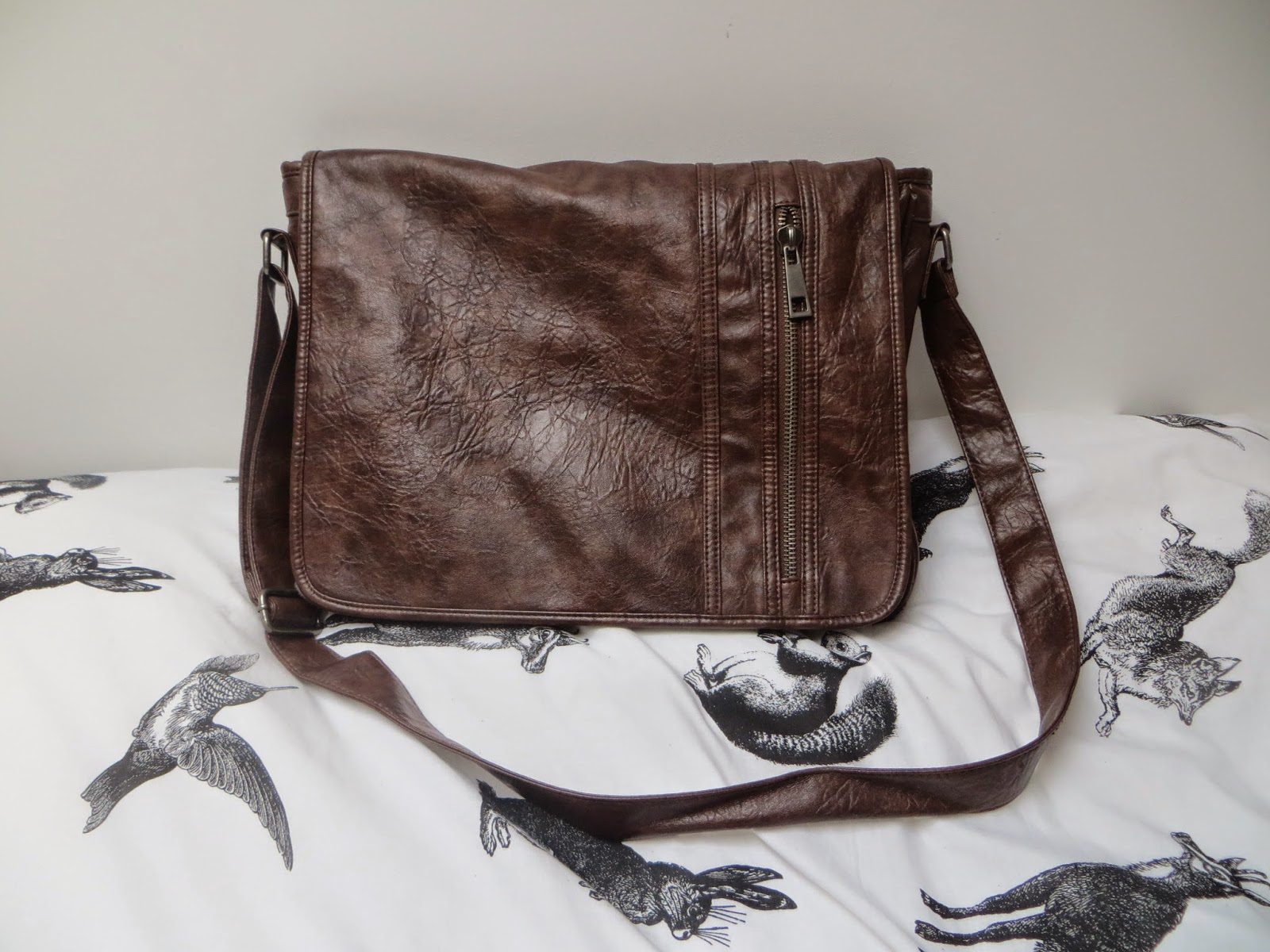 If we’re gonna be techinical, I guess I should call it a ‘faux leather satchel’ from River Island. Is that even correct?

I use this for pretty much everything. It’s my Uni bag, it’s my bag if, well, pockets aren’t enough! I’ve had it for about a year now, and it’s survived, which is amazing. considering my bags usually break because I’m dumb, and fill them with as many textbooks as physically possible.

It doesn’t look like it’s for sale anymore, but here’s quite a similar alternative!

I often tend to edit videos whilst on a train, especially on the way back from wherever I’ve been, as it generally involves a good bit of vlogging. When I vlog, I vlog A LOT, and I end up cutting the footage down by a good 50% before it hits YouTube.

That tends to be why I pack my Sony headphones instead of the Apple earbuds that came with my phone, it feels more appropriate for editing, and people are less likely to overhear.  Those headphones are a dream, and were only £10 from Amazon! (Though it looks like the price has gone up slightly since then.)

A book and 3DS are simply for distraction and things to do. I carry a notepad around with me very often as I like to jot things down rather than putting them in my phone.

I always carry snacks, which is why we have the Reese’s there, though sometimes I do go for a healthier option!! And if you’re eating peanut butter snacks, you better hope you pack some mints!!

The other things are general essentials, water, a pen, wallet and my portable charger. I bought this as my phone’s battery was terrible, I’ve since replaced that phone but habits die hard I guess! I barely use it anymore, but I feel comforted knowing it’s there. These are a great investment, and they’re affordable too! 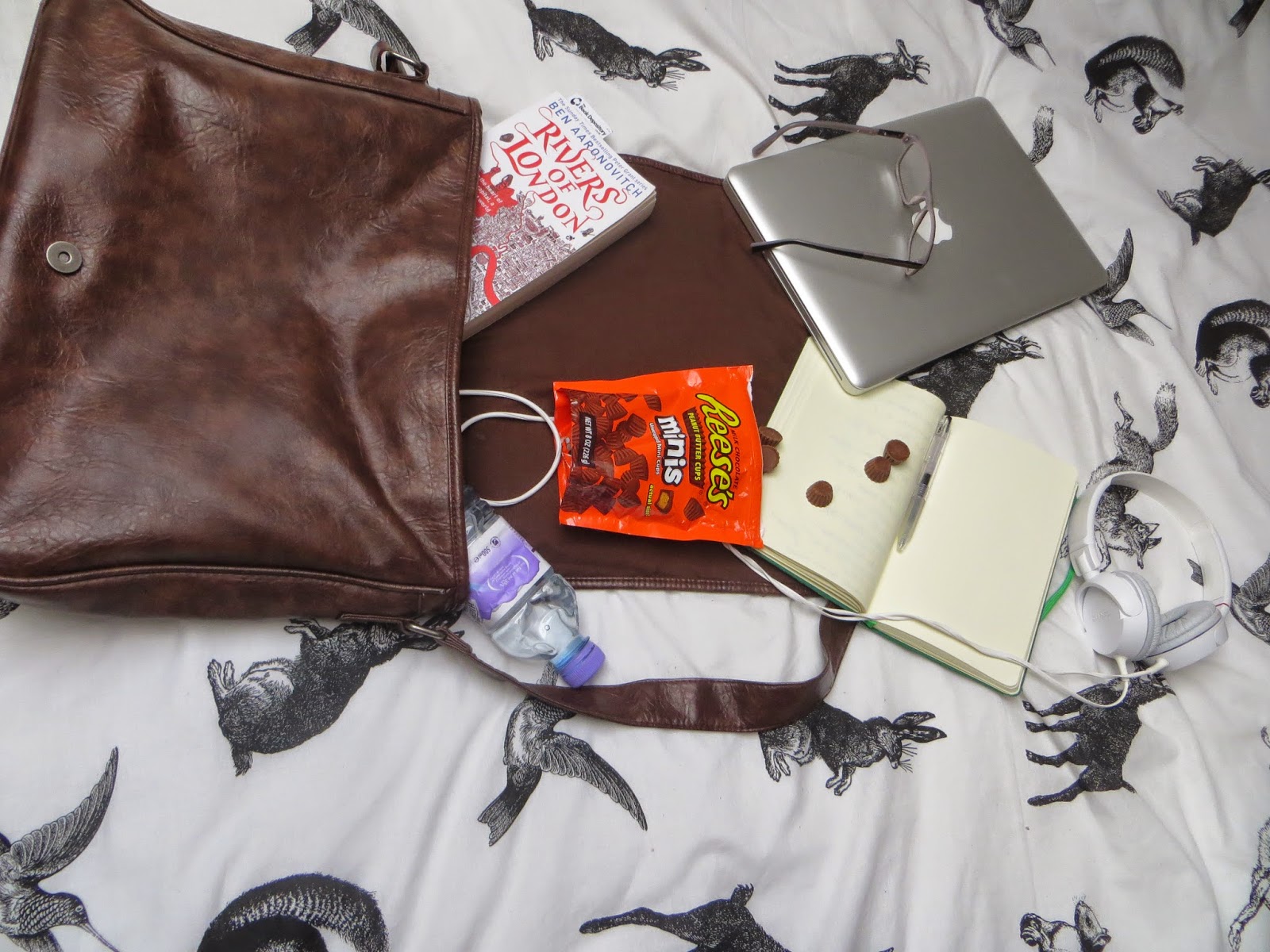 I tried to take an artsy ‘everything thrown out of the bag’ picture. Don’t think it worked. But I got to eat those Reese’s cups after taking this, so that was great.

This is closer to what my bag looks like on an average uni day, though now that I live within walking distance of uni, rather than having to get a train, I don’t tend to carry a book round with me very often.

Hope you enjoyed this one, and I’ll see you next time! With how things are going, that will probably be in about 20 minutes.